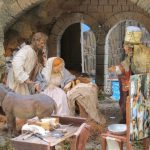 Beléns are elaborate nativity scenes – it is the Spanish word for Bethlehem. More than just a stable with animals and figurines, however, the Spanish beléns can be huge scenes, complete with many different houses, farms, rivers and marketplaces. The Spanish often set    one of these up in their homes in the lead up to Christmas, but much larger ones are placed in shop windows or town squares. 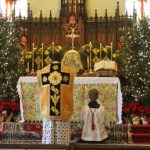 before or just after the mass. 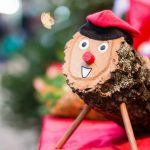 A Christmas tradition unique to the Catalonia region is the Caga Tió, or pooping log. Essentially it is a piece of log, which has been dressed up with the addition of small wooden legs, a face, a blanket and a barretina (Catalan hat). Children keep the Caga Tió in their homes or schools in the run up to Christmas and feed it small pieces of bread or orange peel each evening. Then, on Christmas Eve or Christmas Day, they hit the log with a stick, singing the special Caga Tió song, asking him to poo out lots of turrón (a sweet nougat) and     other sweets for them. 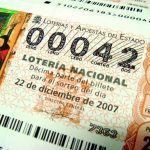 The Spanish National Lottery is a big deal at Christmas time, and almost everyone plays it, making it the biggest lottery draw in the world. The Christmas Lottery is so big that it has been given the nickname ‘El Gordo’ or the ‘Fat One’, because of the huge amounts of cash you can win. Taking place on December 22, it has been held every year since 1812, and the    winning numbers are sung out by school children. 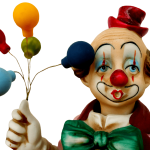 December 28, a few days after Christmas, is known as the Dia de los Santos Inocentes and is the Spanish version of April Fool’s Day. This is the day for playing pranks, or dressing up in funny wigs and hats. 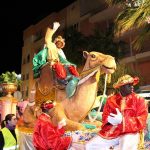 It’s the Three Kings, or Reyes Magos (Melchior, Gaspar and Baltazar), who bring children their gifts in Spain, not Santa Claus (although he is becoming more popular now, too), and on January 6, not Christmas Day. On the night of January 5, the Kings parade through the towns across the country with their entourage of helpers, animals and elaborate floats, throwing sweets out for the children. When the kids return home, they leave out their shoes for the Kings to fill with presents overnight.The Basque Father Christmas.The Basque Father Christmas. 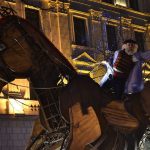 The Basques have their own version of Father Christmas or Santa Claus, in the form of Olentzero, a mythical giant, dressed in peasant’s clothing and smoking a pipe. In Bilbao, on the night of December 23, Olentzero travels all the way down Gran Via towards the Arriaga Theatre, ready to bring gifts for children on Christmas Eve. 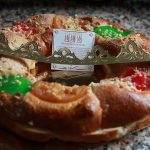 Instead of Christmas cake or Christmas pudding, the Spaniards enjoy the Roscón de Reyes, usually on the Day of the Epiphany, on January 6. A sweet bread ring, it is topped with crushed almonds and candied fruits, and is sometimes stuffed with whipped cream. Sometimes a small figurine is hidden inside the bread, and the person who finds it has the honour of buying next year’s roscón.