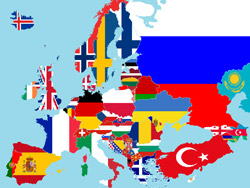 Sixty years ago in Rome, the foundations were laid for the Europe that we know today, ushering in the longest period of peace in written history in Europe. The Treaties of Rome established a common market where people, goods, services and capital can move freely and created the conditions for prosperity and stability for European citizens.

On this anniversary, Europe looks back with pride and looks forward with hope. For 60 years we have built a Union that promotes peaceful cooperation, respect of human dignity, liberty, democracy, equality and solidarity among European nations and peoples. Now, Europe’s shared and better future is ours to design.

Here you will find an overview of events around Europe to mark the 60th anniversary of the Treaties of Rome and look back at some of the milestones that have shaped today’s Europe.